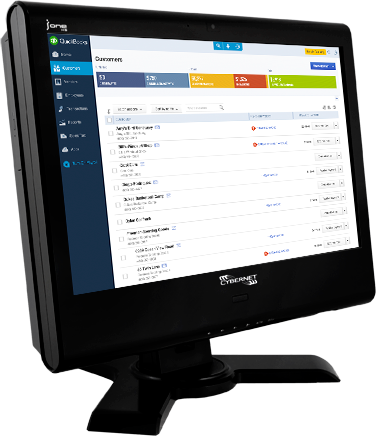 Athena Health Care Systems’ mission is to provide the highest quality of care and customer service to its residents and their families. Throughout New England, Athena Health Care Systems is recognized as a leader and one of the largest managers of skilled nursing facilities since 1984. Facilities within the network offer short-term rehabilitation, long-term rehabilitation, respite and hospice care, as well as a whole host of other services in a friendly, homelike environment.

The staff at Athena Healthcare facilities found it cumbersome to log patient care entries in electronic medical records (EMR) software on run-of-the-mill desktop computers. Unlike paper patient charts — which are handy to carry into the patient's room and provide all the relevant information — desktop computers mounted at nursing stations are immobile. The time gap between engaging with the patient and walking all the way back to a nursing station had grown unacceptable and left room for errors both small and potentially dangerous. Records became increasingly inaccurate and patient care suffered. In addition, Athena Health Care staff found that new EMR software ran slowly, plus they had bugs in their existing HP and Lenovo computers, leading to further frustration. Lagging or broken computers threw a wrench in the entire operation, and could even jeopardize patient health. Athena needed a new computing option right away, and they needed it to be relatively mobile, have universal mounts, and be simple to operate.

Standard replacement desktops were off the table when it came time to upgrade. Instead, Athena Health Care engaged in an extensive vendor search, and eventually contacted Cybernet Manufacturing. Cybernet was happy to provide a demonstration unit of the high-quality enterprise-grade iOne H6 computer for the staff to put through its paces. The iOne H6 with a 20" screen is a wall mountable all-in-one PC that can be installed in kiosks deployed near patients’ rooms, and comes with universal VESA mounting options, a powerful CPU, and responsive touch screen technology. The iOne H6 was tested with the hospital’s standard EMR software and offered better runtime and cleaner operation than their previous solutions, plus the modern touch screen functionality their previous computers lacked. Funded by a government grant, Athena Health Care went forward with their Cybernet iOne H6 order, and ended up installing hundreds of units both in kiosks and in patient and exam rooms across their range of healthcare facilities.

Providing access to EMR software within the vicinity of the patient allowed staff members to provide the excellence in care that Athena Health Care promises its patients and their families. The ability to log patient care entries quickly and conveniently restored productivity and improved staff's overall work satisfaction. The closer and more conveniently located iOne H6s also provided the patients with more thorough healthcare and faster access to their medical records, lowering wait times and increasing accuracy of care. Athena Health Care was able to address both their staff's frustration and the decrease in quality of work with Cybernet's touch screen PC, the 20” iOne H6. They were so happy with the solution that over 750 iOne H6 units have been installed throughout Athena Health Care long term care facilities since the initial demonstration. As a result, patients received better care, staff was happier, and the Athena hospitals and facilities moved forward into the future of healthcare technology.

Providing access to EMR software with the vicinity of the patient allowed staff members to provide the excellence in care that Athena Health Care promises its patients and their families.