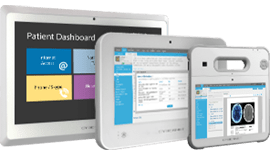 The unique needs of the healthcare industry require specialized computer hardware beyond the scope of most every other industry. We invite you to take a few moments to review some of our most recent success stories and learn how our partners are using Cybernet's medical computers to make processes more efficient, save money and improve patient care.

Being battery powered, Baker County’s carts were very bulky and hard to wheel around the facility. Not only that, the team reported that nearly every two to three months they would suffer a breakdown and require a replacement.

While the team was originally only looking for a monitor, they were pleasantly surprised to see that the CyberMed NB22 was an all-in-one PC solution. This would allow them to replace their powered carts, monitors, and PCs.

A month after deploying their new workstations, Baker County is happy to report no issues. Far from it, their nursing team continues to report positive feedback about their new workflows.

Royal Orthopaedic hospital had been using the same computers for the past ten years with some rather poor results. Units that were constantly breaking down paired with unresponsive customer service created an untenable situation.

Being battery-powered, the NB24 could be easily mounted onto their Ergotron carts and moved into treatment bays seamlessly. Furthermore, being fanless and IP65 certified, they could be deployed in operating rooms with no issues.

Having deployed the NB24 and S24 units across their theatres and treatment rooms for over a year now, Royal Orthopaedic reports they’ve had no issues with their units. In fact, they are planning an expansion at the end of the year

Medpod needed to find a medical grade monitor that already had 60601-1 certification to serve as the head unit for their latest telemedicine carts in order to facilitate FDA approval for their devices.

It became immediately clear that the CyberMed PX22 medical monitor not only checked off all of their boxes, but it also included features like an antimicrobial housing and IP65 certification that was attractive to their end users.

After deploying their telemedicine carts outfitted with the Cybernet unit, Medpod has seen growing interest in their telehealth products over the last couple of years. The team has received consistently positive feedback.

Houchin Community Blood Bank had decided to upgrade their blood bank computer systems, requiring new hardware. The hardware needed to properly run their software and have the rugged construction to survive in the field.

The team found the Rugged X10 tablet had a large enough screen to properly display their software. Just as important was the integrated barcode scanner built right into the handle that allowed them to scan donor vials on the spot.

Having been deployed for the better part of a year over at Houchin’s fixed and portable phlebotomy stations, the new workstations have yet to receive any negative feedback from the team. In fact, they are requesting more tablets.

The team at Bayfront Health, Spring Hill was using standard, very heavy battery-powered Ergotron carts with entire desktop computers outfitted onto them, and these delivered a host of issues.

The NB unit ticked off every requirement the IT team at Spring Hill was looking for. Firstly, and most importantly, they were fanless and IP65 certified. This was enough to convince the team that Cybernet’s solutions were perfect.

Across the board, sentiments about the new workstations have been resoundingly positive at Spring Hill since their implementation. They’re comforted that their units can be sanitized and won’t spread harmful bacteria.

TooSonix had the experience and technical prowess to conceptualize a medical device that would revolutionize the dermatology space. What they needed was a medical computer capable of turning that vision into a reality.

When TooSonix came across Cybernet’s CyberMed S22. Instantly, the team was relieved to see this powerful computer was truly medical grade, supporting all of the certifications needed to attain EMA approval.

TOOsonix had no problems whatsoever receiving EMA approval for their System ONE-M. With the CyberMed S22’s IEC60601-1 medical certification there was no question as to whether or not the team’s device was safe to go to market.

Bear Valley Community Hospital needed what many hospitals need in the current day: a portable, powerful, lightweight medical computer cart system for their team of dedicated clinicians and nurses.

After testing several different manufacturers, Bear Valley quickly realized that Cybernet's NB22 battery-powered medical computer was the only unit that checked off every box on their wish list, as well as several more.

The team at Bear Valley report nothing but good news with regards to their new Cybernet computers. The computers last an entire shift and then some, and Bear Valley plans to expand use to some of their clinics as well.

Saudi German Hospital Ajman (SGHA) was looking for portable medical devices that could capture information on the go at the patient bedside. This would allow clinicians to retrieve and record patient data more efficiently.

The Cybernet units were easy to integrate into SGHA’s workflow. Through the early stages of their implementation SGHA has seen no issues with the hardware’s durability or reliability.

Did you know we also have a Cybernet site?

Navigating our Cybernet site will help make sure the information you see on our site is the most accurate to your needs.

View Cybernet
Stay on Cybernet US